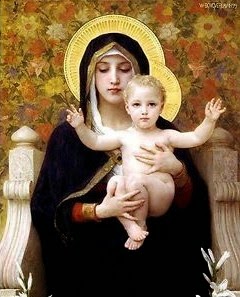 The world gave her back a corpse. 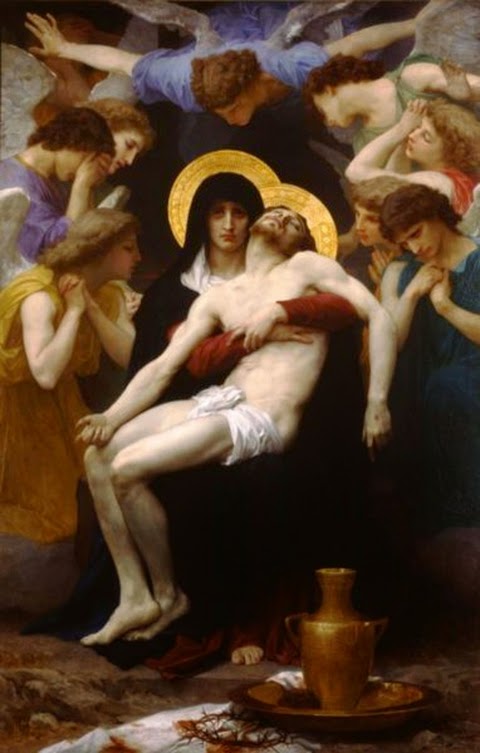 There are a few parishes in the Archdiocese of St. Paul-Minneapolis where it seems to me the Mass is less about adoring God and Christ Crucified, than it is about "having a worship experience."
I do not like this at all.
Posted by Old Bob at 3:50 PM 3 comments:

Some Thoughts on Crucifixion 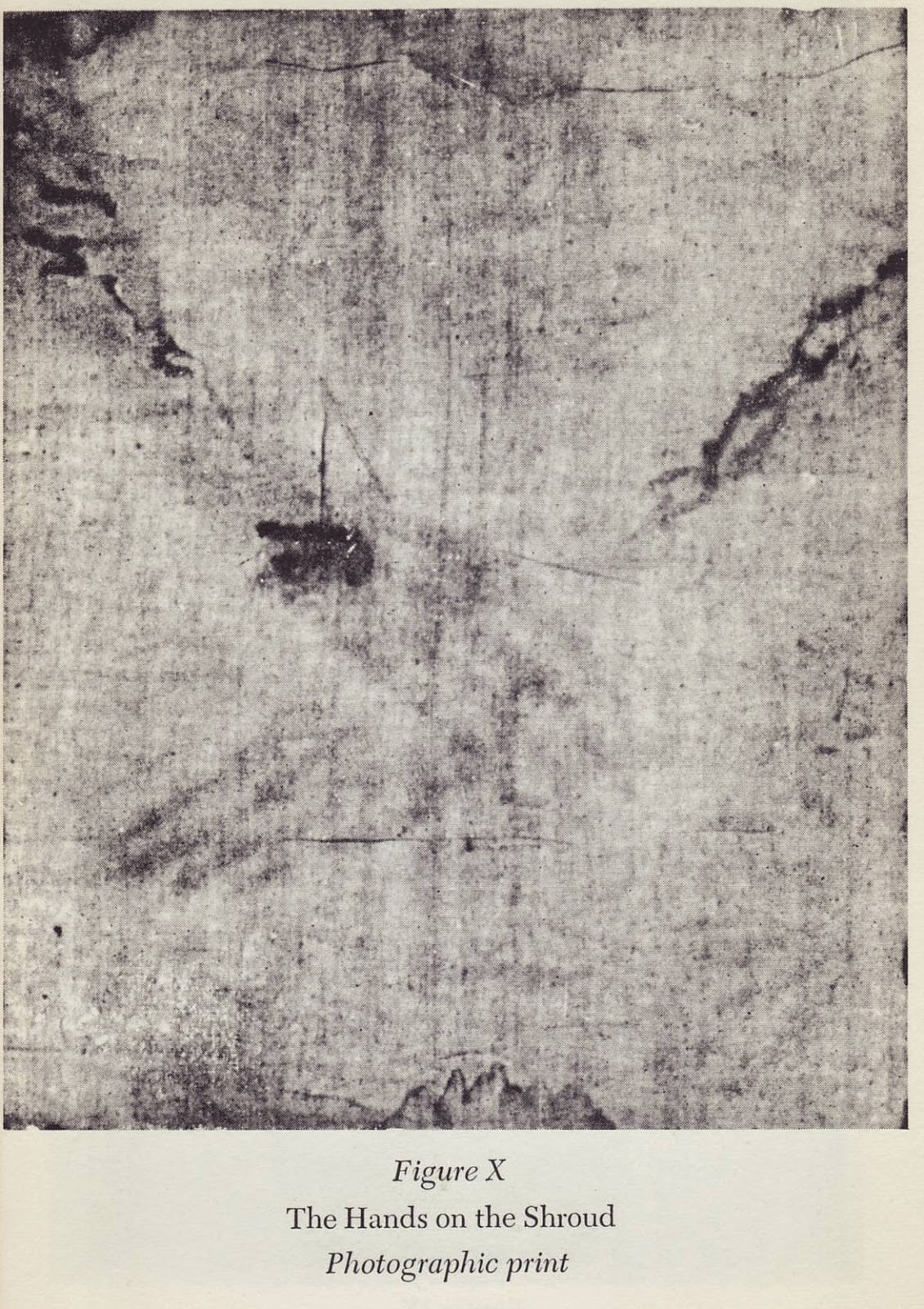 If you examine this picture from the Shroud of Turin, taken from A Doctor at Calvary by Pierre Barbet, M.D., you will see by the blood flow from the wound in Jesus' wrist (we can assume straight down) that Jesus' arms were about a 45º angle from the horizontal.
This means that each of His arms was supporting about 71% of His body weight.
This may seem odd: how can this be?
It's a principle of physics that if an object is hanging from two supports, perhaps on two strings or ropes, the farther apart the supports are, the greater the tension on the supporting ropes.
Naturally, the heavier the object, the greater the tension.
(A side fact is that no rope, for instance a clothesline, can be pulled so tight that there will be no sag at all in it.  It will sag from its own weight.)
Dr. Barbet estimates Jesus' weight to have been about 175-180 pounds.  This means that the "pull" on each of His arms would have been about 124-128 pounds.
One may think that a healthy, fit, and strong man could lift 125 pounds in each hand without too much trouble.  This may be so.
However, Jesus was neither healthy nor fit at the time.  He had had nothing to eat since supper the night before.  He had sweat blood in the Garden, which besides causing great pain to His whole body, lowered his resistance.  He had been brutally scourged with Roman whips.  He had to carry the Cross until (as Scripture mentions) the Roman soldiers made Simon carry it; because Jesus might have died on the way to Golgotha, and Pilate's orders were that Jesus be crucified.
To make matters worse, when Jesus was hanging supported only by His arms, He could not breathe.  He could inhale but not exhale.  To exhale, He would have had to rest his weight on the nail through His feet.  The whole point of crucifixion was a gradual increase pain and weakness to cause asphyxiation.
(When I was about 16 or 17, I jumped up and hung from the high bar in the school gym.  I indeed found that the farther apart I moved my hands, the greater was the pull on my arms.  I also found, as Dr. Barbet had predicted, that I could inhale but not exhale.  I would not recommend trying this.)
You will notice that Jesus' thumbs are not visible.  This is so because when the nails were driven -- through the little hollow spot between the wrist bones called Destot's Space -- they greatly injured the median nerve, this creating more pain and pulling the thumbs in across the palms.
That said ---
All this physical pain was, I'm speculating, far far less than the mental and emotional agony He endured.  I myself can become very saddened by thinking of even one nasty thing that someone did to me, even if it was long ago; or even one nasty thing I did to someone else.
Now Jesus was sinless, of course; but at least from the Garden to the Cross, He carried in Himself the "evil residue" of all the sins committed by every person, in the entire world, from the creation to the end of time.  No wonder that towards the end He cried out in agony to His Father.
Posted by Old Bob at 10:20 PM 2 comments: 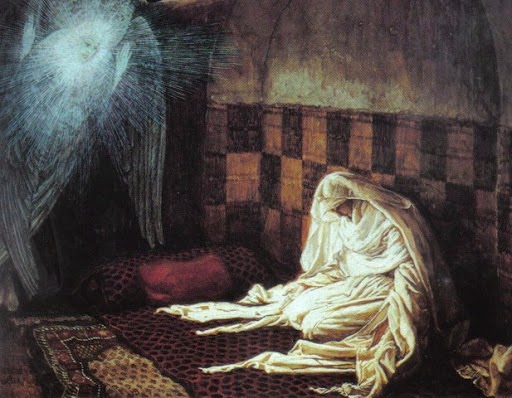 I have been wondering lately why the celebration of the Annunciation came to fall on 25 March (in today's civil calendar).

I was looking up things about it, and found that in an internet article about the date it says that Ephraim the Syrian taught that the Annunciation fell on 10 Nisan in the Jewish calendar, which is the day the Passover Lamb is selected.

Still unanswered is the question: where did Ephraim get 10 Nisan?

Here's my theory: Mary herself told Luke.  So he didn't write down that she told him.  That's not important.  What's important is: from whom else would he have found out?

He wrote about a lot of details no other evangelist mentions.

Occam's Razor: the simplest solution is usually the right one.
Posted by Old Bob at 11:05 PM No comments:

In the Beginning was the Word . . . and the Word was made flesh 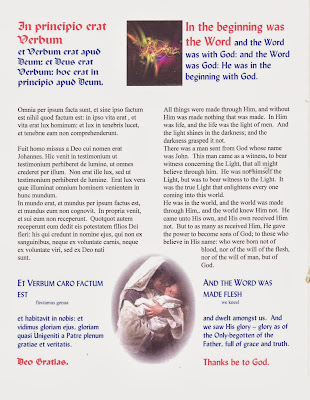 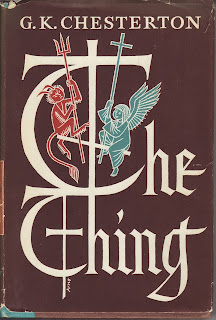 In "Heretics," Chesterton discussed and criticized the distortions of traditional Christianity, and in "Orthodoxy," he explained (very clearly and wittily) how and why he found himself on the side of traditional 2000-year-old Christianity.
In "The Well and the Shallows" Chesterton - by then having "crossed the Tiber" to Rome, defended the position that Roman Catholicism was the source of all that was admirable in the civilization of the Middle Ages (a position held also by historians such as Christopher Dawson, R. W. Southern, and Régine Pernoud).

In "The Thing" Chesterton describes how and why he himself became a Catholic, even though it cost him; he argues that one cannot argue against Truth when one finds it.
*
Here are a few snippets defending the traditional family:

"Among the traditions that are being thus attacked, not intelligently but most unintelligently, is the fundamental human creation called the Household or the Home. That is a typical thing which men attack, not because they can see through it, but because they cannot see it at all. They beat at it blindly, in a fashion entirely haphazard and opportunist; and many of them would pull it down without ever pausing to ask why it was put up."

"Some social reformers try to evade this difficulty by some vague notions about the State or an abstraction called Education eliminating the parental function. But like many notions of solid scientific persons, it is a wild illusion of the nature of mere moonshine."

"The existing and general system of society, subject in our own age and industrial culture to very gross abuses and painful problems, is nevertheless a normal one. It is the idea that the commonwealth is made up of a number of small kingdoms, of which a man and a woman become the king and queen and in which they exercise a reasonable authority, subject to the common sense of the commonwealth, until those under their care grow up to found similar kingdoms and exercise similar authority. This is the social structure of mankind, far older than all its records and more universal than any of its religions; and any attempts to alter it are mere talk and tomfoolery."
Posted by Old Bob at 1:31 AM No comments:

Going to Hell in a Handcart

The Christian tree has its roots in Jewish ground (think Jerusalem, Athens, Rome).


Christianity built European civilization, especially that of Western Europe, from which American civilization and culture derive.

There are superb and distinguished historians who have demonstrated this; I mention especially Christopher Dawson, Thomas E. Woods, R. W. Southern, Hilaire Belloc, and Régine Pernoud.

This culture began to fragment about 1500; see Jacques Barzun's "From Dawn to Decadence"; and the fragments have largely dissolved.

There came to be a spiritual and moral vacuum in western Europe, which was filled by the gruesome and bloody regimes of National Socialism, Fascism, and Communism. Those were defeated but the moral vacuum remained.

This -- in my mind -- is the main reason Islam has gained such a foothold in Europe, a foothold that may well be impossible to stop or reverse.

In short, insofar as Christianity goes away, secularism, totalitarianism, and Islam will take its place.